Greeting from São Paulo, the largest city in South America! I have left Argentina behind and moved onto Brazil, but I’ve been meaning to tell the story of a cooperative that left a huge impression on me back in Buenos Aires. Below is my story of Creando Conciencia and the new perspective it has given my research. The interview was conducted in Spanish, and all translations are my own.

I took the wrong bus, one taxi, and then the right bus as the stormy sky grew ever more threatening, making my way slowly to a warehouse in the Benavidez neighborhood of El Tigre, a town on the delta north of Buenos Aires. I arrived just before a heavy downpour to meet the workers of Creando Conciencia, a recycling cooperative of 46 socios, or worker-owners, and realized quickly that my time there was definitely worth the journey.

Creando Conciencia welcomes you with hand-painted murals on its gates depicting its workers and reminding visitors of the people behind this essential service. As a worker coop and empresa social (social business), Creando Conciencia holds its worker experience at the center of its mission. The cooperatives headquarters includes a small backyard garden with fresh vegetables, a large space where workers share breakfast, clean bathrooms, and cozy offices. The workers wear comfortable uniforms and take time for mate breaks.

Although I am spending more time working on my map, I was inspired to give Creando Conciencia some extra attention. Ramiro Martinez, one of Creando Conciencia’s founders, described the business as a cooperativa de conception pura. For me it was just this: a pure example of why I first became interested in cooperatives and why they continue to energize me on this year-long journey.

In 2005 a group of neighbors saw two needs in their community: a recycling system and good jobs. Like other cooperatives all over the world, Creando Conciencia was born when a group of people united to realize their common wants and needs. They now operate with two strong values in mind: trabajo digno (work with dignity) and cuidado del medio ambiente (care for the environment.) All the workers have been owners from day one, and they receive a monthly salary. 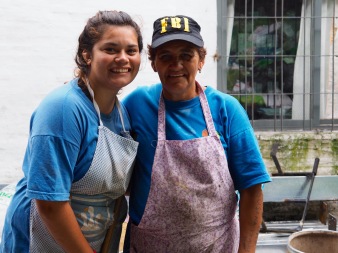 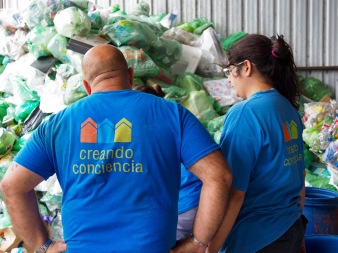 In contrast, cartoneros (litter pickers) in the city of Buenos Aires earn based on how much recycling they turn in each day. There are municipal subsidies available for the estimated 15,000 cartoneros organized into a dozen or so cooperatives, but only about one third of pickers collects a subsidy. Half receive the full 5,200 pesos ($263) and the other half receive 2,700 pesos ($136) per month. These figures are according to a Guardian article in 2016; salaries are likely to have risen with Argentina’s rapid inflation.

Edigarlo Jalil, the current president of the cooperative explained, “When you’re working on the street, you don’t have a bathroom, you’re in the sun, you’re taking care of your kids.” Creando Conciencia offers a different model. And in addition to providing a much more safe and pleasant daily working experience, the cooperative acts as a support network for its workers in other ways. Members organize political engagement campaigns, vaccination clinics, and lectures on social business models.

Co-op member Daiana Rodriguez took a break from the initial phase of separating recyclables into categories to speak with me about her experience. (And I think it’s worth noting the break didn’t affect her earnings, as it might in companies with wages are tied to hourly productivity.)

“I didn’t know it was a coop, at first I saw the position and thought ‘oh no it’s work with trash,’” she explained. “But we don’t work with trash, we work with recycling, and it’s quite comfortable.” When asked how it feels to work at the coop in comparison to another company, she nodded and then paused, gathering here thoughts to describe those intangible differences. “There is more compañerismo. Everything isn’t strict and straight like in a normal company.” 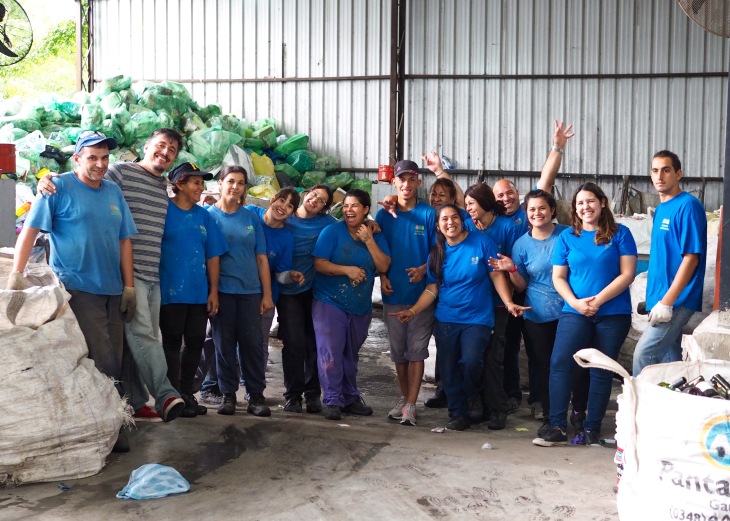 I seem to have been born with a pretty severe aversion to strict authority. Just ask my parents or middle school teachers. At the beginning of college, it depressed me to think of my seemingly inevitable future in some large, hierarchical company. I thought everyone around me was just better at living that role of a cog in the machine. As Michael Moore explains in his documentary Capitalism: A Love Story, we feel strongly about living in a political democracy while accepting a dictatorship at work.

I grew up thinking this aversion was something unique, maybe even rebellious about me. However, I’ve been introduced to ideas in Johann Hari’s new book Lost Connections: Uncovering the Real Causes of Depression that have significantly shifted this perspective. After years of travel and research digging into the ever-rising rates of depression and anxiety, Hari identifies nine causes. He calls Cause One “Disconnection from Meaningful Work.” To me, the chapter read like a case for cooperatives.

Hari describes groundbreaking research on British civil service members by psychiatrist Michael Marmot in the 1970s. Marmot used the civil service as a real life laboratory because of its striking uniformity. In the “Rolls-Royce of government bureaucracies,” no one is poor, no one is astoundingly rich. Everyone works an office job, free from physical danger. But there are strictly enforced hierarchies and Marmot was there to study how those differences affected health.

After years of research, Marmot found that people at the top of the civil service hierarchies were four times less likely to have a heart attack than people at the bottom of the ladder. Moreover, as your position in the civil service rose, your chances of developing depression fell. “There was a very close relationship between becoming depressed and where you stood in the hierarchy.”

Reading this and trying to make sense of it in the context of my work, I was reminded of my very first Watson interview with Joseba Beldarrain, the director of the Confederació de Cooperatives de Catalunya in the Sans district of Barcelona. I originally set out on my Watson trip thinking I would explore happiness in cooperatives. Why fight for the development of the cooperative movement if the structure wasn’t making workers happy?

“When you are working in a cooperative you have times of happiness and times of unhappiness,” Joseba stressed. Sometimes, if business isn’t going well, coop workers have to vote to lower their wages. “A cooperative is an instrument of the collectivity… As an individual you are always an instrument of someone. Collectively you are all together deciding the future. And that’s important.” To Joseba, it wasn’t a matter of worker happiness that made coops superior, it was worker participation in the big decisions, those that affect your future.

It’s a good point. Who was I to ask a question about happiness—work is work and its stressful, coop or not. Right? I stopped asking about emotional health in my subsequent interviews.

Marmot’s study challenges that notion of work is work. He found that British civil servants with higher degrees of control over their work were much less likely to develop depression or severe emotional distress than people working for the same pay and even with the same status as people with a lower degree of control over their work. “Think about your own life,” Marmot says to Hari in an interview. “Just examine your own feelings. Where you feel worst about jobs—and probably life—is when you feel out of control.”

Daiana at Creando Conciencia spoke as a perfect foil to this complaint. She described their meetings at the coop: “Here, you can give your opinion.” And when I asked if people actually listen to that opinion, she responded with a nod, “Obvio!”

In his chapter about Joe the paint-mixer, Hari seems to suggest that Joe needs to find a better job. That paint-mixing is hopelessly meaningless. I read the chapter with a twinge of frustration, knowing that there are so many necessary jobs in the world that feel repetitive or less creative. Until the level of workplace automation reaches its zenith, we will have paint-mixers and recycling organizers and British civil servants processing paperwork, and these workers deserve meaningful jobs.

I underestimated Hari. Low and behold, in the book’s third section, “Reconnection. Or, a Different Kind of Antidepressant,” Hari investigates worker cooperatives as a social intervention for depression and anxiety! He profiles the worker-cooperative Baltimore Bicycle Works and its effect on the mental health of Meridith, one of its founders.

All of Meredith’s previous jobs had been an “out-of-control experience.” There, “it didn’t matter if you had a good idea—if that was outside of your job’s scope, nobody was really interested in it.”

As Marmot explained to Hari:

Cooperatives don’t change the work itself, but they restructure the Big Man Boss power dynamic that’s making us sad. To Joseba in Barcelona this meant collectively deciding your future. Hari made a stunningly similar comment. In a worker cooperative, “you are reconnected to the future—instead of knowing you could be fired at any moment, you know where you’ll be a year or five years from now, if you choose it and keep working hard.” Really, read this book.

And so I will return to the question of happiness in my research. I don’t think that worker coops are a panacea for depression (and neither does Hari), nor do I believe that every worker at Creando Conciencia or any other cooperative is blindingly happy. But if it is becoming more and more obvious that the way the majority of work is structured now is making us unhappy, I think we should start focusing on solutions. Can cooperatives make us happier?

View all posts by mlfisher17